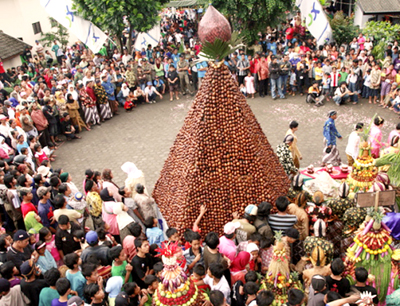 Aside from natural attractions, Merapi National Park (Kaliurang) has other interesting allures. These include several traditional ceremonies done by the locals. As for the reference, tourists can witness Merti Bumi Ceremony. Usually, people of Tunggal Arum Village conduct such ceremony every Sapar Month and before the harvest season. This ceremony is also commonly done by the people who live in Turi Sub-District! As for tourists, they can take advantage of the ceremony to get new insight regarding local culture and consider it an attraction, too.

The Nuance
Like other local events, many people gather in an open field of Tunggal Arum Village, including villagers and tourists. The nuance feels so joyful and merry, for sure. The best feature of the event is perhaps the “Salak Gunungan”, which is the pile of snake fruits. Other smaller Gunungan are also seen but they consist of other types of fruits and foods instead of Salak. Only the committee and chosen people wear traditional clothes. That means the audience doesn't have to wear such costume, which is good news for tourists. They do not need to change clothes in order to watch or join the ceremony when coming there.

Enjoying Merti Bumi Ceremony
Tunggal Arum Village becomes the best place for those who want to witness Merti Bumi Ceremony. However, the event is not available every day so tourists should come at the right time (usually during Sapar Month). As an alternative, tourists should consider visiting the site during the harvest season. It is because the locals conduct such ceremony at such special occasion in order to get abundant and successful yields.

According to the locals, Merti Bumi Ceremony also has the purpose to retain the value of culture owned by the people who live in this area. No wonder, villagers never skip the ceremony when the time comes. They even allow tourists to watch and join the ceremony, as long as those people follow the procedures and obey the rules well. Today, in fact, the event has attracted more tourists and makes it more popular among travelers. Somehow, it helps the audience to learn local culture and helps them to appreciate it better.

During the procession, the participants may conduct several phases. First, they may go to collect holy water from different locations. Later, some art performances occur and the locals pray together for good fortunes and abundant harvest. Once it is done, the next activity is to throw a bazaar! As for the peak event, they may perform several carnivals including Tumpeng Wulu Wetu, Persembahan Dance, Pusaka Carnival, Gunungan Salak, etc.

How to Get There
From Adisucipto International Airport, travelers’ prime destination is Turi Sub-District. The distance is 26.8 km, so it takes about 55 minutes to get to the location. What they need to do next is to get to Tunggal Arum Village directly. This whole trip can be done through Turi Street, which is the best route to take.