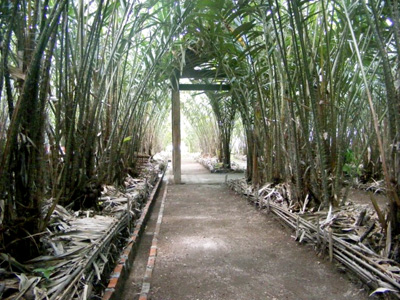 Not all people have tried snake fruit or bark (Salak). Well, such exotic fruit becomes the signature souvenirs of Turi Sub-District in Yogyakarta Special Region, Indonesia. This explains why many tourists come to Omah Salak Farm (a recommended place to buy and eat “Salak”) before heading to Kaliurang. The location is in Wono Kerto Village and it has an easy access. On the site, the guests can pick the fruits directly from the farm and explore the location wholeheartedly! They can also enjoy traditional foods with friends or families in the middle of Salak farm.

The Nuance
In terms of nuance, Omah Salak Farm is definitely pristine. Only snake fruit plants and several gazebos are seen on the site. Though, a small monument having the shape of such fruit has been built as well. Not to mention the farmers are also seen especially during the harvest season. Even though the farm is not quite popular among foreigners, some people from other provinces often visit it due to its uniqueness. They also want to eat the fruit freshly from the plants!

Exploring Omah Salak Farm
Both the locals and foreigners are aware of snake fruits or Salak. In fact, the government markets this exotic fruit to nearby nations like China and Vietnam. For those who never eat the fruit, it is better to pick and eat it directly from the farm. In this case, Omah Salak Farm of Turi Sub-District becomes the best option. The location is on the highland, so the atmosphere feels quite uplifting. Once the guests arrive at the farm, they can explore it and witness the cultivation process.

The best time to visit Omah Salak Farm is during the harvest season. At the time, visitors are allowed to witness and join the harvest process directly. Later, the farmers even may teach them how to make some snacks and foods made of the fruits! These include Salak jam and chips. There is even the special one called snake fruits Bakpia. All of them are tasty, so make sure to try them all before leaving the farm. It is even possible to make documentation during the cooking process, as long visitors get the permission from the farmers.

Here is the thing. Visitors should pay some money to get in the farm. Have no worries. It includes the free lunch and drink. As for the facilities, tourists can take advantage of toilets and gazebos there. Actually, they won’t need any tour guide as the farm is quite accessible. Some people who work there even can talk English.

How to Get There
For those coming from Adisucipto International Airport, they can take a taxi or bus and head to Turi Sub-District. Next, they can directly head to Wono Kerto Village and visit Omah Salak Farm right away. This trip may take around an hour as the distance is 27 km. As for the best route, it is Palagan Tentara Pelajar Street.